Even though printed newspapers and flyers are not as important today as they used to be, the world would definitely not be the same without them and without books, pamphlets, posters, product packaging, and other printed materials. The printing press is still considered one of the most important inventions in history.

Here are eleven important facts you need to know about the history of printing press: 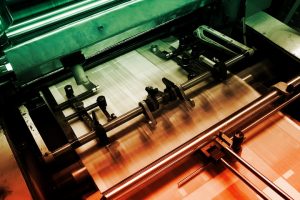 1. Gutenberg was not the first to invent a printing press

It’s not clear who invented the first chinese printing press, but it had been used since the Tang dynasty, which lasted from the 7th to the 10th century.

2. The oldest known printed book is The Diamond Sutra

The Diamond Sutra is a buddhist book that contains the teachings of the Buddha to an old monk. What is so special about this book is that it was dated to May 868, which makes it the oldest known printed book.

The Diamond Sutra was created with wood block printing, a technique that was first invented for printing on textiles.

Printing blocks consisted of carved wood panels that were covered with ink, and pressed against a piece of textile or a piece of paper. Bi Sheng, a chinese inventor who lived during the Northern Song dynasty, was the inventor of the first movable type technology.

Instead of using wood panels, it was then possible to use and reuse individual letters, which made printing text easier.

Other types of printing presses were eventually invented, to serve different purposes. The digital press, for example, makes low-volume printing affordable, while flexography is often used to print colourful food packaging and labels. Flexographic printers are commonly used across different industries. You can find a large selection of flexo sleeves to store the printing paper and accessories.

While printing blocks can still be used for artisanal purposes, there are now many fast and efficient presses that can meet our different printing needs.

5. Printing blocks have been made from different materials

6. The screw press was first used to press olives and grapes

The screw press was invented by the Romans during the first century. This device, which applies pressure to a flat plane with the help of a screw, was first used to transform olives into olive oil, and grapes into wine.

The screw press had a few different uses, and it would eventually inspire Johannes Gutenberg, the inventor of the European printing press.

When Gutenberg invented his printing press in 1439, he adapted a few inventions to create his own. Paper was being manufactured, different types of inks were being developed, and he adapted wood block printing and a screw press so he would be able to mass produce texts and images.

He made his printing blocks from metal, and experimented until he was satisfied with his invention.

To create his printing blocks, Gutenberg invented a technique that used a matrix and a hand mould. Since he had experience as a goldsmith, he knew how to produce coins with the help of moulds. He used his knowledge to create the letters of his movable type system.

He created them with an alloy of lead, tin, and antimony, and his alloy remained a standard for a very long time.

Working with his associates, Gutenberg also developed an oil-based ink that was more durable than the water-based inks used with wood blocks.

His oil-based ink was also a better match for his metal printing blocks and for the printing press he had invented.

10. The first book printed by Gutenberg was a copy of the Bible

Before the printing press was invented, scribes living in monasteries were responsible for copying the Bible, carefully creating one book after the other.

The very first book printed by Gutenberg on his printing press was the Bible, of which he made 180 copies. His work was accomplished faster than the work of the scribes.

11. The offset press was invented during the 19th century

Of course, printing innovations did not stop with Gutenberg’s printing press: during the late 19th century, the offset press was invented.

It featured printing cylinders running continuously, and an impression cylinder pressing the paper against it. Offset printing allows for many colours to be printed in only one run.

12 Summer Camp Craft Ideas That Will Improve Your Creativity